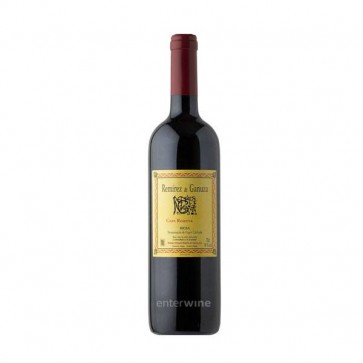 If there are wines that transcend time, then Remírez de Ganuza Gran Reserva may well be one of them. In fact, the 2004 vintage of this Spanish red wine is one of the very few Spanish wines which got a perfect, Robert Parker 100-point score.

Crucially, this Gran Reserve red wine comes from one of La Rioja's best terroirs. Moreover, it is exquisitely crafted by its winemaker, Fernando Remírez de Ganuza, a purebred riojano through whose veins runs wine instead of blood.

Made from Tempranillo and Graciano coming from over 60-year-old vineyards, the hand-picked, scrupulously selected grapes were destemmed and cold-soaked in 7000 l. wood vats.

After that, Remírez de Ganuza Gran Reserva 2007 was drawn-off and transferred into new French oak barrels, where it was aged for 46 months. Finally, the wine was aged for some years in the bottle before its eagerly awaited release.

Drink this red wine from La Rioja by Remírez de Ganuza over the next 15 years. Decant a minimum of 2 hours before drinking.

We have very few bottles of this gem, so don't miss it! This may be your only chance.

Additional Information
Additional Information
Reviews
2 Reviews
Best Rioja
Value
The best Rioja I have tasted. Top level!
Review by Alexandru (Posted on 25 March 2019)
ganuza
Value
Gobsmackingly good. I guess it will peak in about 10 years.
Review by Fabulous (Posted on 13 December 2018)
Write a review
This websites use cookies. By continuing to browse the site you are agreeing to our use of cookies.
Accept More information