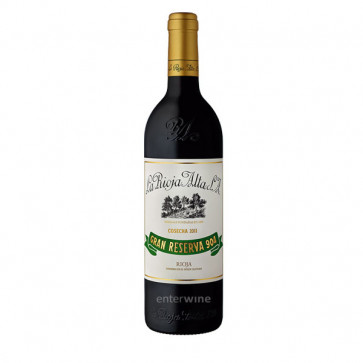 Gran Reserva red wine from La Rioja in magnum format. Blend of Tempranillo and Graciano aged for 4 years in barrels and 42 months in the bottle.

Produced only in outstanding vintages like the 2011 one, qualified as "Excellent" by the DOCa La Rioja regulatory board, this Rioja red wine is made from a blend of 89% Tempranillo, sorted from over 60-year-old vines, and 11% Graciano, coming from the exceptional Montecillo vineyards, located in the village of Fuenmayor.

Meticulously crafted following traditional methods, on arriving at the cellar the grapes were destemmed and gently crushed, after which they were fermented in stainless steel tanks for 17 days. Then a portion of this Gran reserva red wine completed malolactic fermentation in the diposits, a process which lasted about 75 days.

In June 2102, the best samples were transferred into 4th and 5th year American oak barrels (built in the cooperage of the winery), and aged for 4 years, during which period they were racked every 6 months. The wine was then blended and, after a period of 6 months, La Rioja Alta 904 Gran Reserva 2011 Magnum was bottled in November 2016. Finally, it was aged for a further 42 months in the cellar before being released onto the market.

We suggest that you decant this Gran Reserva from La Rioja at least 1 hour before drinking.