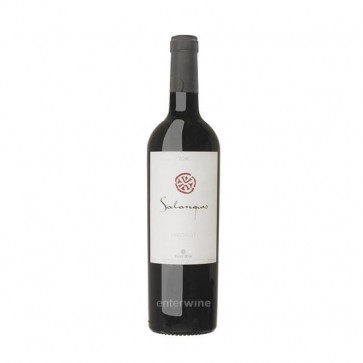 Year after year, the exceptional Salanques, produced by the Mas Doix winery, stands out as one of Priorat's most sophisticated and elegant wines.

It is made from vines planted in steep slate soils, and located at altitudes between 350 and 500 metres above sea level.

A blend of old-vines Grenache and Carignan, 10% of this Crianza red wine comes from young Syrah vineyards around 15 years of age.

The 2016 vintage was defined by the high summer temperatures. Some abundant rainfalls in September, though, came just in time to revitalize the vines, allowing them grapes to achieve optimal maturity.

Each plot was separately harvested and vinified. Alcoholic fermentation was carried out with periodic punch-downs of the solid skin cap.

Then Salanques 2016 underwent malolactic fermentation in new and 2nd year French oak barrels, after which the wine was aged for 14 months.

Finally, this red wine from Priorat was aged for 12 months in the bottle before its release. It was neither filtered nor clarified before its bottling.

Decant a minimum of 2 hours before drinking.

top
Incredibly classy, arguably one of Priorat's top as far as elegance is concerned. Enjoyable to the last drop. Review by Land on Land (Posted on 16/01/2018)