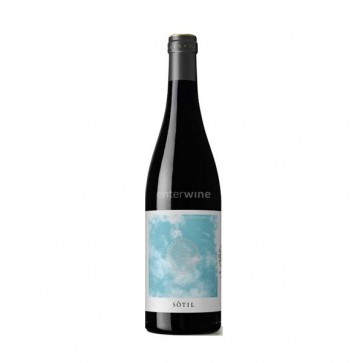 Labeled as VT Mallorca, the exquisite Sòtil is produced by the Mesquida Mora winery.

Up to the current vintage, this Spanish red wine had been produced combining local and international varieties. In 2016, though, the winery decided that it was time to let go of foreign crutches. As a result, the 2016 vintage is, for the first time, a single varietal Callet, arguably Mallorca's most important indigenous red grape.

The grapes were organically farmed, following biodynamic principles and the traditional almanac lunar cycle. The vineyard is provided with a natural vegetation cover which helps to protect the plants. The vines are also fertilized by natural mulches from the area containing native minerals. This biodynamic fertilizer is also infused with medical herbs to help boost the strength of the roots.

The harvest of this red wine from Mallorca was carried out by hand. After that, the grapes were separately macerated and fermented in stainless steel tanks according to its variety.

After malolactic fermentation was completed, Sòtil 2016 was transferred to French oak barrels where it was aged for 10 months.

Drink until 2024. Aerate 1 hour before drinking.

sotil
Majorcan wines are getting closer. They're not there already, but the goal is near. This is excellent but, come on, forget Pinot and let Callet speak for itself. It needs no crutches. Review by Wine judge (Posted on 08/06/2018)
Mallorca
This is a refined wine. Subtle palate and lots of finesse. Very enjoyable. Review by Farrow (Posted on 27/11/2017)