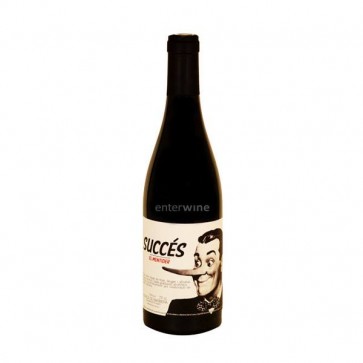 A single varietal Spanish red wine produced by the young winemakers Mariona Vendrell and Albert Canela, Succés El Mentider is solely made from Trepat, an indigenous variety from the southern Catalan region of Conca de Barberà.

A variety which produces highly characteristic, low-alcohol, deliciously drinkable wines, this wine by the Succés Vinícola winery is produced from old vines over 100 years of age.

After a traditional vinification and a long maceration process, this Trepat red wine was aged for 9 months in French oak barrels.

It is worth noting that, traditionally, the Trepat grape was considered good only for producing rosé wines.

However, Succés El Mentider 2016 successfully proves yet again that the variety can also be used to craft outstandingly elegant red wines.

Drink this red wine from Conca de Barberà over the next 5 years.

Decant this Crianza red wine 30 minutes before drinking. If that is not feasable, at least aerate the wine a little.

Additional Information
Additional Information
Reviews
1 Review
mentider
Value
I was more than pleasantly surprised by this flinty, peppery wine. Will buy again.
Review by Nassim (Posted on 27 September 2019)
Write a review
This websites use cookies. By continuing to browse the site you are agreeing to our use of cookies.
Accept More information