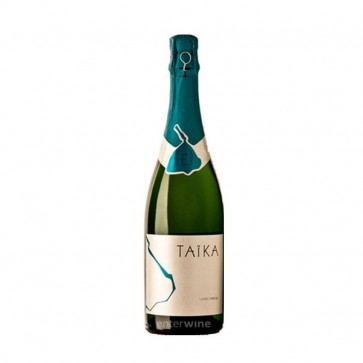 This is the new vintage of one of the most interesting sparkling wines produced in the whole of Spain.

Taïka 2012 is produced by the great Raúl Bobet, widely recognized by his peers as one of the world's top winemakers.

This wine of the Castell d'Encús winery is made from high-altitude vineyards located on the Pyrénées foothills.

The place is not far from Tremp, a town belonging to the Costers del Segre DO in the northern Catalan province of Lleida.

The wine is made from a blend of Pinot Noir and Sémillon (the grape used to produce the famed Sauternes), along with a touch of Riesling.

Harvest was carried out by hand, and subsequent vinification took place in 25 hl wooden vats.

This sparkling wine was produced following the Ancestral Method. Thus, alcoholic fermentation was stopped when the amount of residual sugar was enough to complete secondary fermentation in the bottle without having to add neither yeasts nor any additional sugar.

Elegant and really complex, this wine has a ridiculously low production of 600 bottles.

Properly stored, it will improve in the bottle for a minimum of 5-7 years.

In any case, we suggest that you store it for 1 year in order to allow its complexity to fully harmonize.

Additional Information
Additional Information
Reviews
1 Review
taika
Value
A UFO in the form of a sparkler. The winemaker is clearly a master of his craft, because this most unconventional of blends is marvelous. Shockingly good.
Review by Explorer (Posted on 21 August 2018)
Write a review
This websites use cookies. By continuing to browse the site you are agreeing to our use of cookies.
Accept More information