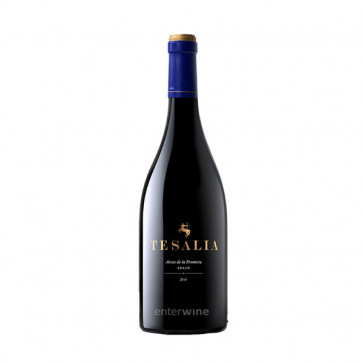 Located in Arcos de la Frontera, on the foothills of Sierra de Grazalema, within the VT Cádiz Designation, Bodega Tesalia is the personal project of Richard Golding, an Englishman enamoured with Andalusia.

The 2016 vintage of Tesalia, the flagship Spanish red wine of the winery, has a very interesting composition; namely, 65% Petit Verdot, 25% Syrah, and a 10% shared between Tintilla de Rota and Cabernet Sauvignon.

Situated in a privileged area which receives the cooling influence of both the Mediterranean and the Atlantic Ocean, the grapevines are planted in poor, clayey-limestone soils, and receive a huge amount of sunlight. Growing conditions, in sum, could hardly better.

The grapes were harvested at night by hand. Once in the cellar, they were cold-macerated for 4 days to preserve their aromatic compounds. Separately vinified, alcoholic fermentation lasted about 20 days. Once the process was completed, the red wine Tesalia 2016 was aged for 12 months in French oak barrels before being bottled.

This is characterful red wine from Cádiz. Sunny, subtle and saline.

Additional Information
Additional Information
Reviews
1 Review
A discovery
Value
I am quite impressed by this wine. Focus, precision and depth.
Review by Opie & Anthony (Posted on 3 November 2020)
Write a review
This websites use cookies. By continuing to browse the site you are agreeing to our use of cookies.
Accept More information