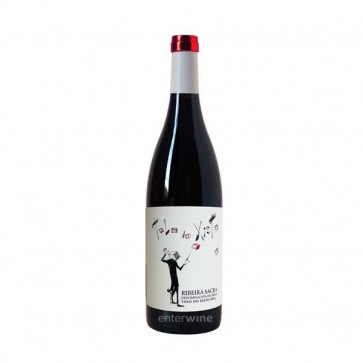 This is the third vintage of Tolo do Xisto, produced in the Galician region of Ribeira Sacra by a team composed of the Coca brothers, owners of the Coca i Fitó winery, and the Galician oenologist Andrea Obenza.

This Spanish red wine is intended to be an hommage to a region, Ribeira Sacra, that has some of the most scenic, dramatic vineyards not only of Spain, but of any country in the world.

The name of this red wine from Ribeira Sacra is a reference to the "Xisto", a type of slate that is a key ingredient of most of the soils of the region.

Those slate soils, in turn, are responsible for the distinctive minerality of the wines produced in Ribeira Sacra.

A single varietal Mencía wine, Tolo do Xisto 2015 was traditionally vinified in stainless steel tanks and aged for a short period of 4 months in French oak barrels.

sacra mencia
Ribeira Sacra!! Another wonderful Spanish wine region. They keep coming like crazy. Who could have known that Mencia could taste so good as this? Review by Fintan Kippers (Posted on 23/08/2018)
Mencía
Remembrances of pomegranate, flowers and some sanguine notes. Ribeira Sacra produces wonderfully original wines. Review by Ribeira (Posted on 27/11/2017)