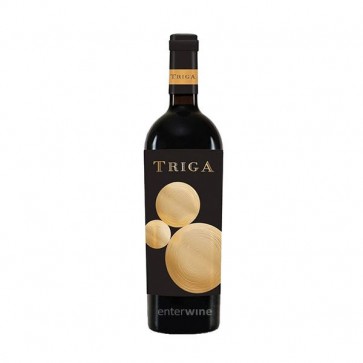 Made from over 85-year-old grapevines planted in five plots, Triga is an exceptional Spanish red wine produced by Bodegas Volver.

Four of those plots are planted with Monastrell vines, while the fifth is planted with Cabernet Sauvignon. Some of the vines, which are located at an average altitude of 750 metres above sea level, are ungrafted. As for the soils, they are filled with fossils and covered by a thick layer of limestone.

Produced by Rafael Cañizares & Jorge Ordóñez, with the aid of Aussie oenologist Chris Ringland, Triga 2017 was carefully harvested and meticulously crafted. Each plot was separately vinified. Malolactic fermentation took place in French oak barrels, where this wine from DO Alicante was also aged for 20 months.

Once the ageing process was completed, this red wine from Alicante was blended, resulting in a proportion of 85% Monastrell (aka Mourvèdre) and 15% Cabernet Sauvignon.

After bottling, and before hitting the market, this reserva red wine was aged for a further months in the cellar in order to fully round it.

Decant at least 1 hour before you drink it.

Additional Information
Additional Information
Reviews
2 Reviews
Terrific!
Value
Superb wine. Immensely powerful and deep. The real thing.
Review by B-52 (Posted on 2 April 2019)
Triga
Value
Wow and Woooow!! Apparently massive, almost black-coloured and quite imposing. The nose is incredibly rich and the palate is... much elegant and nuanced than you would expect. Enormous structure, great precision, immense room for improvement. Exceptional!!
Review by Camel trophy (Posted on 25 October 2017)
Write a review
This websites use cookies. By continuing to browse the site you are agreeing to our use of cookies.
Accept More information