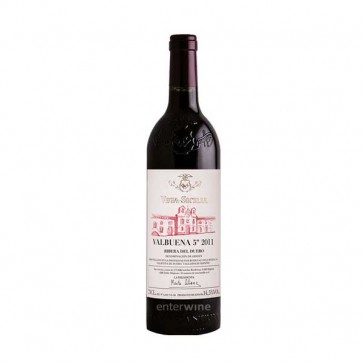 Reserva red wine from Ribera del Duero. Blend of Tinto Fino (Tempranillo) and Merlot aged for 36 months in barrels and for 24 months in the bottle.
Reserva. 36 Months in French and American oak barrels
Percentage of Alcohol: 14.5º
Bottle size: 75 cl
D.O.: Ribera del Duero
Grapes Varieties: Merlot, Tinto Fino,
Wineries: Bodegas Vega Sicília
P 96 ñ 96 95 96
Sign up to get notified when this product is back in stock

A legendary Spanish red wine from Ribera del Duero, Valbuena 5º Año Cosecha is arguably one of the best expressions of the Tinto Fino (Tempranillo) variety . As usual, the Tempranillo is nuanced by a touch of Merlot. Both come from vineyards around 35 years of age.

First, it was aged for 12 months in 75% French and 25% American oak barrels, built in the winery's own cooperage. Then, it was transferred into big wooden vats and aged for a couple of years.

Bottled in May 2019, Valbuena 5º Año Cosecha 2016 was aged for 2 years in the bottle before its commercial release. The whole 5-year process took place in the stunning, state-of-the art winemaking facilities which Bodegas Vega Sicilia inaugurated in 2010.

Be sure to decant this red wine from Ribera del Duero at least 2 hours before you drink it.