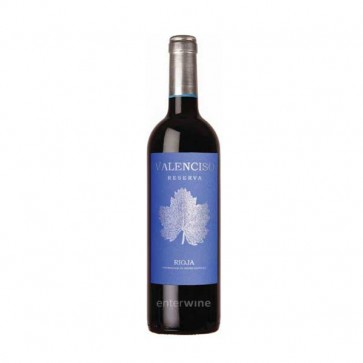 A single varietal Tempranillo, Valenciso Reserva is produced by the Valenciso winery.

This wine has gained a considerable recognition over the last years - Tim Atkin MW, to name one critic, has repeatedly praised it - so much so that its classy blue label decorated with a silver leaf has already become a quality trademark.

It is made from low-yielding vines located in Rioja Alta, farmed following sustainable agricultural practices and environmentally friendly procedures.

Though still suffering from the heavy drought of the previous year, the cool temperatures of 2012 greatly benefited the grapevines, which ripened slowly and steadily. Harvested by hand, the grapes were selected on site. Once in the cellar, they were destemmed and fermented in concrete vats.

Decant Valenciso Reserva 2012 a minimum of 30 minutes before drinking.

Drink this Spanish red wine from La Rioja from now until 2028.

Valenciso
One of the most elegant Riojas out there. It wears its greatness lightly. Review by Richard the third (Posted on 05/04/2019)
Valenciso
Tried this after reading high praise from Tim Atkin. Simply spectacular. Can't get enough of this Rioja!! Review by Freddy the Watchmaker (Posted on 30/10/2017)
Sense títol
I think that this wine will be even better the next year, then I will give you 5 stars. ;)
Review by Harry Richardson (Posted on 09/03/2016)
Sense títol
Parker 93!!! Lovely!! Review by Brandon Turner (Posted on 03/03/2016)