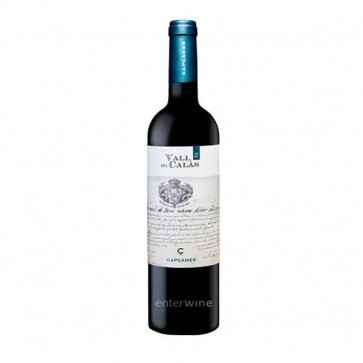 The red wine Vall del Calàs is made from a blend of Merlot (around 10 years of age), Tempranillo (coming from 25 year-old vines), and Grenache (vines 30 to 60 years old), farmed following the guidelines of organic agriculture.

All of them are grown in terraced granite soils, typical of the Montsant region.

Manually harvested and selected twice, each of the grape varieties was separately vinified according to its specific requirements.

After being destemmed, the grape bunches were macerated and fermented in stainless steel tanks. Then this organic Spanish red wine started malolactic fermentation and was subsequently transferred into new and 2nd year 228-litre French oak barrels, where it completed the process and was aged for a period of 12 months.

Finally, Vall del Calàs 2014, produced by the Celler de Capçanes winery, was blended and aged for a further 3 months in the cellar prior to its release.

Decant this red wine from Montsant 30 minutes before drinking. Drink until 2025.

Additional Information
Additional Information
Reviews
1 Review
Edison
Value
I recommend this wine. It is an unpretentious but very nice red from Catalonia. No imbalances, no excesses, just fruit and a touch of herbs wrapped in freshness. And it is organic.
Review by Alva (Posted on 14 November 2017)
Write a review
This websites use cookies. By continuing to browse the site you are agreeing to our use of cookies.
Accept More information