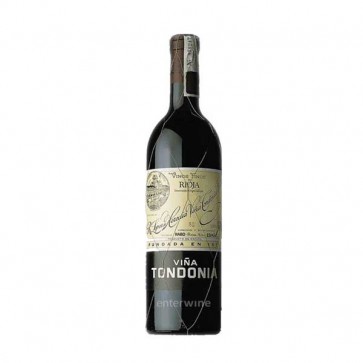 One of La Rioja's absolute classics, Viña Tondonia Reserva is crafted from a traditional blend of 70% Tempranillo, 20% Grenache and 10% Graciano and Mazuela (Carignan).

The 2010 Rioja vintage was "Excellent", according to the Rioja Regulatory Board.

Meticulously harvested and selected during September, the vinification of the grapes was carried out following the same techniques that, established more than a century ago, have put bodega R. López de Heredia-Viña Tondonia winery in a class of its own.

Once the process was completed, this Spanish red wine from  was aged for 6 years in oak barrels, with two annual rackings.

Prior to its bottling, Viña Tondonia Reserva 2010 was clarified with egg whites. It was not filtered, however, in order to preserve its traditional character.

Aerate this red wine from La Rioja some time before drinking.

Additional Information
Additional Information
Reviews
3 Reviews
reserve tondonia
Value
The kind of wine I like. Smooth on the mouth, with nice flavours and a gentle all the way til the end.
Review by Robert K. (Posted on 12 June 2018)
Great value for the money !
Value
Very traditional, great quality, old style Rioja, which still has stunning freshness and acidity, long and fruity taste. Strong recommendation !
Review by Christina (Posted on 11 January 2018)
ET
Value
Yes, this truly ia an extraterrestial wine. Class, age-worthiness and subtelty embodied. Very young and very old at the same time. Spellbinding.
Review by Mr. Magoo (Posted on 23 October 2017)
Write a review
This websites use cookies. By continuing to browse the site you are agreeing to our use of cookies.
Accept More information