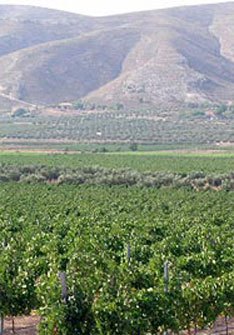 The objective of the Bernabé y Navarro winery is to craft quality wines that will give prominence to the Monastrell grape varietal.

The Bodegas Bernabé y Navarro winery in the Alicante DO of Spain has the primary objective of cultivating the native Monastrell grapes in a modern manner that will provide for wines that are very expressive of their terroir. This winery realizes this goal without forgetting their tradition by combining their modern winemaking practices with traditionally vinification practices. In addition, this winery seeks to craft unique wines, vinos de pago (highest quality wines of Spain), as well as wines with clearly identified quality rankings following the vision of their vineyards, the Finca Casa Balaguer.

The Finca Casa Balaguer vineyards are located in the region of Villena, inside the Alt Vinalopó province of Alicante. This vineyard is the proberty of the Bodegas Bernabé y Navarro winery and they have nearly 40 hectares of vineyards that primarily produce Monastrell (Mourvèdre) grapes. Some of these Monastrell grapevines are nearly half-a-century old and these are all low yielding grapevines. The vineyards are spread out along the valley that runs between Villena and La Cañada, and the grapevines are situated between 2,130 and 2,460 feet (650 and 750 Meters) of altitude. The rich alluvial soils at this vineyard are full of sand and stones. This is a very unique micro-climate that is perfect for grape cultivation and it receives protection from both northern and southern mountains. The Bodegas Bernabé y Navarro winery is awaiting its organic certification and it is currently follow all of the organic agricultural and vinification procedures required for this certificate, utilizing only natural fertilizers and organic pesticides.

The Monastrell red wines by Bernabé Navarro are a fresh combination between a continental and Mediterranean climate which provides for uniquely flavored wines that has made this winery well-known both in Spain, and around the world. The baby of this winery is their red wine, Beryna 2010. This wine is crafted from a coupage of 70% Monastrell grapes along with a blend of Tempranillo, Cabernet Sauvignon, and Syrah. This wine received the incredible rating of a 92/100 according to the 2011 edition of the Parker´s Wine Buyer´s Guide.

Other grape varietals cultivated by the Bodegas Bernabé y Navarro winery´s vineyards include: Tempranillo, Cabernet Sauvignon, Merlot, Syrah, and Grenache. In addition, this winery is currently experimenting with the cultivation of Graciano, Malbec, and Alicante Bouschet (Garnacha Tintorera).