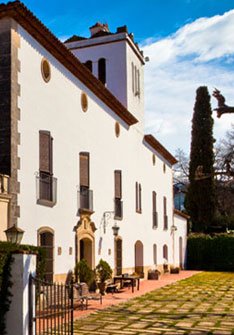 From a grand tradition and some of the best vineyards in Penedès, Spain, the Bodegues Sumarroca winery offers a wide variety of incredibly wines and cavas from a wide range of grape varietals.

The name “Sumarroca” is a surname wish a long history of winemaking. Originally, many generations of the Sumarroca family crafted wines in Llimiana, in the region of Pallars Jussà, inside of Lleida. This was the Sumarroca family´s home land in Northern Spain. In the 1980s the family decided to move to Penedès where they bought two vineyards, Molí Coloma and Heretat Sabartés. The Sumarrocas wasted no time and began producing white wines and cavas very soon after the move. In 1999 the Sumarroca family set up their headquarters in Marquès de Monistrol and they re-named their winery Finca Sumarroca.

With over 400 hectares of grapevines, the Bodegues Sumarroca became the largest winery of Penedès with their vast vineyards. The Bodegas Sumarroca of Penedès is now crafting wines following the same tradition of their founder: to improve each and every vintage to achieve innovative wines and cavas with their own unique personality and structure. The majority of the wines crafted by the Bodegues Sumarroca winery are crafted under the Penedés Denomination of Origin (DO) however this wineries cavas are crafted in the Cava DO of Spain. Today the Sumarroca winery has a grand collection of single varietal white wines which are crafted from native grape varietals as well as foreign grape varietals that have become perfectly adapted to their new terroir.

With a desire to evolve, learn, and supersede their competition, the Bodegues Sumarroca is now considered to be a grand wine project throughout Spain. Today Sumarroca winery has started producing wines in the Rueda DO, the Rioja DOC, and the Montsant DO.