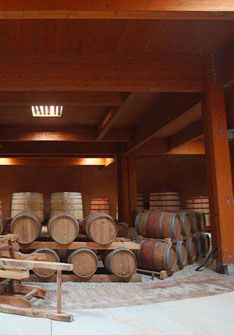 The Emilio Valerio winery has realized its aim to produce terroir-driven wines in the richly historic northern Spanish province of Navarra.

The Emilio Valerio winery is a family-run company situated in Dicastillo, a town belonging to the autonomous region of Navarra, Spain. Back in the 1980s, the family began to recuperate vineyards with an average age of 50 years. For the past 15 years, the winery has been applying biodynamic practices in all of its farming procedures. Between the years of 2008 and 2009, the Valero family constructed the winery's facilities, a circular building that is home to 12 wooden vats and 6 concrete vats of different capacities, along with 100 big casks and French oak barrels, the majority of which are new. Currently, the Emilio Valerio winery is being run by the expert French oenologist Olivier Rivière.

The Emilio Valerio winery has 25 hectares of vineyards located at altitudes between 400 and 665 meters above sea level. These vineyards are spread out across 15 small plots on the slopes of Montejurra. The terroir in this region includes a vast array of soils with different compositions, the main elements being limestone, sandstone, and, to a lesser extent, silica. The micro-climate in this region is strongly influenced by the Atlantic ocean with some minor influences from the Mediterranean Sea. Average annual rainfall varies greatly, falling anywhere between 200 and 1000 millimeters per year.

This winery produces young biodynamic red wines that are aged in French oak barrels to conserve their full expression. These are fruity and complex wines that display a remarkable complexity in the palate. This winery also crafts “vinos de pago”, a sort of Premier Cru wines which are marketed under the label Laderas de Montejurra.