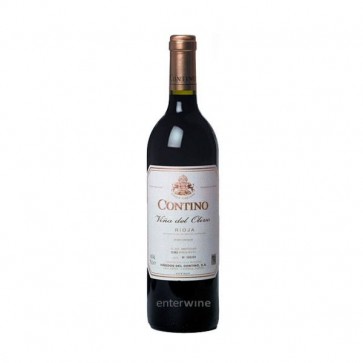 The rare and famed Contino Viña del Olivo is a high-end Spanish red wine made from grapes coming exclusively from El Olivo estate.

Produced by Viñedos del Contino, this reserve red wine is made from a blend of Tempranillo and Graciano.

First, the grapes were destemmed and fermented in 10,000-litre oak vats at a temperature between 25 and 28ºC for 17 days.

Then this Reserva red wine from La Rioja was drawn-off and transferred into new French oak barrels, where it completed malolactic fermentation.

Finally, Contino Viña del Olivo 2017 was aged for a minimum of 12 months in the bottle before its release.

We suggest that you decant this red wine from La Rioja 60 minutes before drinking.

Incidentally, this wine will evolve nicely over the next years.

Additional Information
Additional Information
Reviews
2 Reviews
olivo
Value
How come that they release this so early? I'd have preferred to buy it after 5 years in the bottle. Anyway, it is still a great wine, perfect to store for 10-15 years in a good home cellar.
Review by Demanding (Posted on 20 December 2018)
olivo
Value
Rioja aristocracy. It deserves much praise and respect.
Review by Imperial master (Posted on 18 June 2018)
Write a review
This websites use cookies. By continuing to browse the site you are agreeing to our use of cookies.
Accept More information