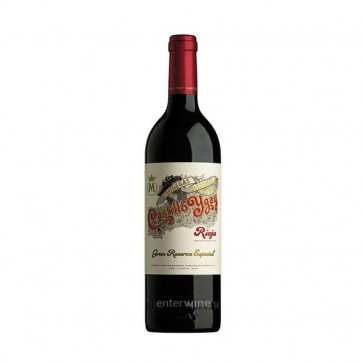 In 1852, Luciano Murrieta y García-Lemoine founded Marques de Murrieta, the first commercial winery in the history of La Rioja. He had brought to Spain the Bordeaux winemaking techniques so he could fulfill his dream of making a world-class Spanish red wine.

Years later, Don Luciano bought the Ygay estate and built the Ygay Castle, from which this Marqués de Murrieta Castillo de Ygay Gran Reserva takes its name. This wine is, therefore, a classic among classics.

Made from 84% Tempranillo and 16% Mazuela (aka Carignan), the grapes come from Pago La Plana, an estate located 485 metres above sea level in the Finca Ygay. Vinified separately, the grapes were destemmed, gently crushed and fermented in stainless steel vats. The must remained in contact with the skins for 11 days, during which the cap was regularly plunged to ensure an homogeneous extraction of flavour and colour compounds.

After that, Marqués de Murrieta Castillo de Ygay Gran Reserva Especial 2011 was aged for 28 months in French and American oak barrels. Then it was blended and aged for 13 months in concrete diposits. Finally, it was aged for 5 years in the bottle before its release.

We suggest that you decant this Rioja Gran Reserva 1 hour before drinking.