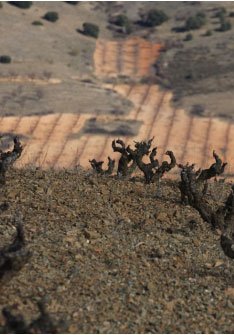 Utilizing very old vines from Calatayud, the Bodega Ateca winery produces some of the best expressions of Grenache in Spain.

The Bodega Ateca winery is one of the six wineries belonging to the Orowines Group (a name that literally means “Golden Wines”). This winery, along with the rest of the companies in the Orowines group, is well-known for its terroir-driven orientation and its use of indigenous grape varieties.

The Bodega Ateca is located in the hillside of the Ateca mountains, in the norther Spanish province of Aragón. The winery owns 55 hectares of vineyards spread out through small plots in the surrounding towns. This is a very dry region of Spain with an extreme climate and great temperature changes between days and nights. This micro-climate is ideal for grape cultivation.

The wines from the Bodega Ateca winery are all crafted from Grenache grapes, the native grape variety of this region. The grapevines are between 40 and 100 years-old, and they are located in slate soils at an altitude between 750-1000 meters above sea level. These grapevines have an average yield of 1500 Kg per hectare. These naturally concentrated grapes have an exceptional quality that brings a particular richness, acidity, and minerality to the wines. These wines, moreover, have a great ageing potential.