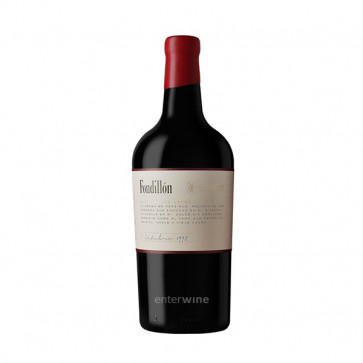 Produced by Bodega Monóvar in DO Alicante, Fondillón is a one-of-a-kind Spanish semi-sweet wine aged for a period of 20 years in centenary American oak barrels.

Although Fondillón is produced in an oxidized style like Sherry or Port, this semi-sweet wine from Alicante (called "vino embocado" or "vino abocado" in Spanish) is not fortified after fermentation; this means that it is made solely from naturally overripen Monastrell grapes.

Planted at around 600 metres of altitude in soils composed of rocks and limestone, the over 80-year-old vines were hand-harvested and meticulously selected. Alcoholic fermentation of Fondillón from Bodega Monóvar lasted 3 weeks, with frequent pump-overs. Once the alcohol content reached 16 to 18%, with about 30 grams of sugar per litre, the process was stopped.

After that, Fondillón 1996 was transferred into centenary American oak barrels and aged for a period of 20 years.

This exquisite Fondillón-one of the very few wines with its own proper name, like Port, Sherry or Cognac-is excellent as an aperitif, paired with dark chocolate desserts or as an after-dinner drink.

More generally, this is the definitive meditation wine.

Additional Information
Additional Information
Reviews
1 Review
MAgical
Value
Woow! This is amazing, like a top notch Port but with more acidity. This will live forever.
Review by Opie (Posted on 26 July 2022)
Write a review
This websites use cookies. By continuing to browse the site you are agreeing to our use of cookies.
Accept More information