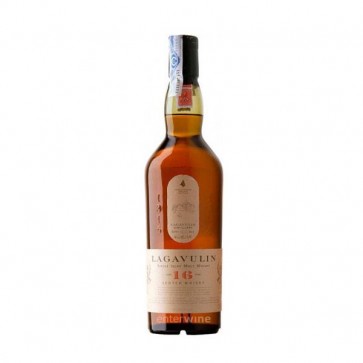 A single malt whisky from Islay, Lagavulin was crafted following a double fermentation process, a long distillation and a 16-year ageing period in European oak barrels.

The journey begins at the Solan Lochs, in the hills above the distillery. The unmistakable smoky-peaty character of Lagavulin 16 derives from two elements. The first is the lochs' water; the second are the South Eastern Islay malts, which have an intense peaty flavour because of the peaty bog on the west of the island.

Malted at nearby Port Ellen, the barley is exposed to a smoke concentration 20 times higher than the typical Speyside whisky. Fermentation takes 55 to 75 hours, after which the whisky is distilled twice in 4 different stills. The first fermentation takes about 5 hours, while the second takes up to 9 hours to complete. Again, the longest for any Islay whisky.

Finally, Lagavulin was matured for 16 years in the dusk cellar, breathing the sea breeze and absorbing the saline air.

The result is a powerful, intense and dry whisky with an amber colour. Very intense on the nose, with prominent peaty and smoky aromes that evolve into remembrances of iodine, algae and sweet spices. The mouthfeel is powerful and seductive, with a deep, resounding smoky note and a salty and sweet touch. Extremely long and satisfying finish.

Lagavulin
You have some nice prices for Chrissake!! Will buy again in the future. I might even begin to drink wine. Review by McMurdoch & McMercy (Posted on 08/06/2018)