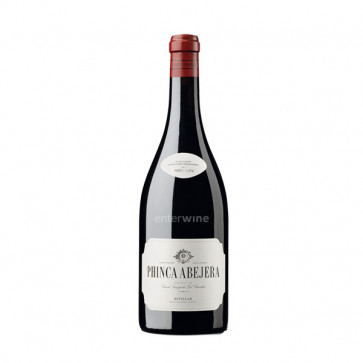 This limited-edition biodynamic Spanish red wine is crafted by the prestigious winemaker David Sampedro Gil, head of DSG Vineyards. Interestingly, Phinca Abejera was one of the first Burgundy-inspired, single vineyard wines ever produced in La Rioja.

Some years ago, the trend was labelled "Rioja's third way" by a distinguished Spanish wine journalist - the first one being traditional Rioja and the second being the New World-inspired one.

La Abejera is the name of a less than 1 hectare vineyard with limestone soils planted in 1929 in the village of Elvillar. Three of the four varieties of this Rioja red wine, Tempranillo, Grenache and Viura, come from that vineyard. Graciano, the fourth one, was sourced from a much younger vineyard, called Valmayor.

Handpicked and transported to the cellar in 10 kg. boxes, the grapes were  destemmed and spontaneously fermented using only indigenous yeasts. Meticulously vinified, during alcoholic fermentation and subsequent maceration the solid skin cap was frequently punched down in order to soften the tannins of the young Graciano grapes.

After that, Phinca Abejera 2017 was aged in French oak barrels for 36 months. It was bottled without filtration or stabilization.

Decant this Crianza red wine at least 1 hour before drinking.

Additional Information
Additional Information
Reviews
1 Review
wine
Value
Fabulous stuff, almost burgundian in its refinement. There's more meat here, though. Sampedro is a trailblazer.
Review by Trailblazer (Posted on 18 December 2018)
Write a review
This websites use cookies. By continuing to browse the site you are agreeing to our use of cookies.
Accept More information