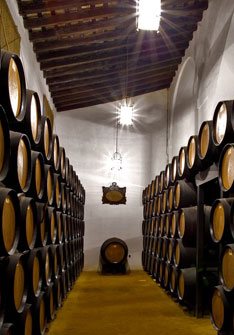 The Bodegas Ximénez-Spínola has been crafting high quality sweet and fortified wines since 1729. Today, it enjoys international recognition and prestige.

The Bodegas Ximénez-Spínola winery was founded in 1729 by the Spínola, a family of Italian origin that came to the Marco de Jerez region in the early eighteenth century following the Spanish wine exportation boom. Today, the winery is run by José Antonio Zarzana, a member of the ninth generation of the Spínola family.

For many years, the wines of the Bodegas Ximénez-Spínola winery had a great reputation in the English and the Dutch markets. It is important to note, however, that the winery did not sell all the wine that it produced, but only its highest quality barrels. One day, José Antonio´s grandfather had the idea of fortifying the unsold wine, and thus began the history of the Ximénez-Spínola Brandy, one of the most famous and exclusive Brandies produced in Jerez. Currently, the Bodegas Ximénez-Spínola produces 3,000 bottles of Brandy every year, and each one of these bottles is individually numbered and personally signed by José Antonio Zarzana's father, an eighth-generation Spínola often referred to as the “Boss” of the winery.

The fortified and sweet wines of the winery are produced by letting the grapes naturally dry in the sun with rotations every 30 minutes in order to ensure uniform exposure to the sun, along with cautious consideration of their humidity levels from the night before. After this exhaustive process the grapes become naturally concentrated with fructose. This, along with the long ageing in American oak barrels, is how the world renowned fortified and sweet wines of Ximénez-Spínola are made.

To ensure that each bottle reaches the appropiate quality standards, the Ximénez-Spínola winery markets a different amount of bottles every year, depending on the quality of the vintage. Thus, no vintage has ever exceeded 12,000 bottles.

The old wines of the Bodegas Ximenez-Spinola winery constitute some of the purest expressions of the Pedro Ximénez grape.