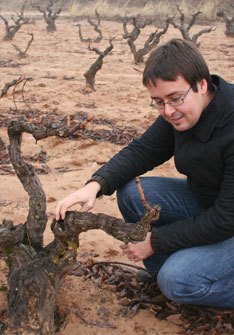 After a long tradition of winemaking in Penedès and Priorat, the Cusiné family moved to the Ribera del Duero to found the Dominio Romano winery.

After a long tradition of winemaking in Penedés with the Parés Baltà winery and with experience in Priorat from the Gratavinum winery, the Cusiné family along with the enologist Jordi Fernández launched the Dominio Romano winery in 2005 in the Ribera del Duero D.O. of Spain. This small family winery is situated near the heart of the Ribera del Duero, in the Rábano province of Valladolid. The philosophy of this winery, just as all of this family´s wineries, is to craft excellent wines with the utmost respect to the environment. With this goal all of the grapes used in Dominio Romano wines were crafted in an entirely organic manner. These grapevines are planted as close to the ground as possible to prevent spring frost and to encourage deep roots that can find water during the dry months of the year. Furthermore, this type of grape cultivation is very useful for extracting the full characteristics of the unique terroir of the Ribera del Duero.

All of the wines from the Dominio Romano winery are crafted from the Tinto Fino grape varietal, which is a clone of Tempranillo. These grapevines are planted in sandy soils and this winery also uses Tinto Fino grapes from other local vineyards who also cultivate fully organic grapes. This winery´s vineyard even features some grapevines that are so old the pre-date the Phylloxera epidemic.

In an attempt to break the norm of winemaking in this region, this winery utilizes a pre-fermentation maceration in 400 liter barrels which contribute to unique oak notes in their wines. This technique is not very common in this region and while it is a modernist winemaking practice, this winery is still one of the most classic winery´s in this region.