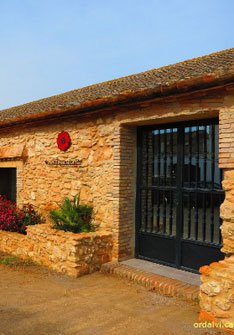 The Finca Viladellops winery runs along the Mediterranean Sea in Massís del Garraf, Spain, and they are working on an ecological project to bring back the native Xarel-lo and Grenache grape varietals from this region.

The Finca Viladellops winery in Massís del Garraf is situated at the Olèrdola Castle in Penedés, just 27 miles (45 Km) outside of Barcelona. The origins of the Olèrdola date back to the Iberians and its historic and strategic importance have been perpetuated over time. This Medieval castle traditionally bordered the divide between the Muslim world.

The first written references in regards to the commercialization of Finca Viladellops wines dates back to the mid-nineteenth century. Specifically, in 1877 and there has been perpetual references from then until 1980 when the winery was abandoned and didn´t restart again until 1999. This winery was brought back from abandonment by the latest generation of the Desvalls family who has a new project to craft 100% quality wines from the Mediterranean. These wines seek to transmit the pure character of this terroir with Grenache being their red wine grape varietal and Xarel-lo being their white wine grape varietal.

The Finca Viladellops estate consists of 500 hectares in Viladellops within the Mediterranean forest. This winery also has 60 hectares of grapevines registered in the Penedés D.O. of Spain. The unique terroir in Massís del Garraf features mountainous terrain that boarders the Mediterranean Sea. These vineyards are situated at 820 feet (250 Meters) above sea level in very poor calcareous soils that are full of clay with high levels of active carbon from large bodies of sediments and marine fossils. This region was unequivocally a seabed in ancient times. This unique terroir has been conserved with great care from years of landscaping, architecture, along with help from its natural environment.

Following the philosophy of crafting organic wines, all of the Finca Viladellops winery´s vineyards are a part of the “Consejo catalán de la Producción Agraria Ecológica” which is the Catalan council for producing organic and sustainable agriculture. As a result all of the wines by the Finca Viladellops winery carry an official organically certified seal. These organic wines by the Viladellops winery in Penedés are pure Mediterranean wines from native grape varietals. This winery is working hard to preserve and maintain the native Xarel-lo and Grenache grape varietals in this region for their white and red wines, respectively.