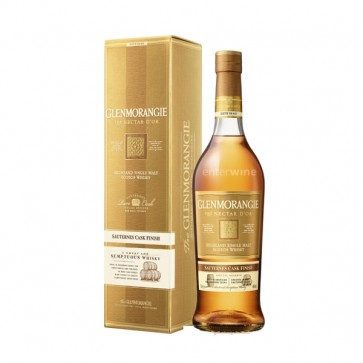 Single Malt 12 Year Old Whisky from the Highlands 46% AVB. Aged for 10 years in American oak barrels and for 2 years in Sauternes barrels.

A rather unique Single Malt Whisky from the Highlands, Glenmorangie Nectar d'Or is one of the most sophisticated products of the Glenmorangie Distillery.

Non-chill filtered, Nectar d'Or was bottled 46% AVB after being aged for 12 years.

The first 10 years this Single Malt matured in American oak barrels, after which it was finished for 2 years in Sauternes barrels, thence the honey and lemony character which puts this Scotch Whisky in a class of its own.

The delicious Glenmorangie Nectar d'Or has a nice amber colour, clean and transparent, with some golden tinges.

The nose is enchanting and extremely original, due to the presence of the Sauternes notes, such as citrus rind, cinnamon, ginger, nutmeg, and even grated coconut.

The palate of this non-chill filtered whisky is luxurious and inviting, with a lush texture and a fresh lemony note intertwined with specks of caramel, ginger cake, toasted almonds and spices, ending on a citrusy and gingery note.