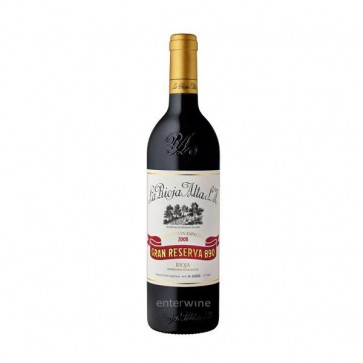 Gran reserva red wine from Rioja. Traditional blend aged for 6 years in oak barrels and for 54 months in the bottle.
Gran Reserva. 72 Months in American oak barrels
Percentage of Alcohol: 14º
Bottle size: 75 cl
D.O.: Rioja
Grapes Varieties: Graciano, Mazuela, Tempranillo,
Wineries: La Rioja Alta
95 95
Sign up to get notified when this product is back in stock

Here it is: the long-awaited 2010 vintage of Rioja Alta 890 Gran Reserva from bodega La Rioja Alta.

Qualified as "Excellent" by the DOCa Rioja Regulatory Board, the mild climate of the summer season helped the fruit to achieve an almost perfect ripening through a slow, steady process.

As usual, this Spanish red wine is made basically from of old-vines Tempranillo (95%), complemented with a touch of Graciano (3%) and 2% Mazuela (aka Carignan).

After a meticulous harvest and a selection both on site and in the cellar, the grapes were destemmed, crushed, macerated and then fermented in stainless steel tanks.

After that, the Tempranillo and Mazuela wines were combined and the resulting blend was transferred into American oak barrels built in the winery's own cooperage. The blend went through malolactic fermentation and then it was aged for 6 years, during which process it was racked 10 times. The Graciano wine completed the same process unaccompanied.

Only the best barrel samples were bottled in March 2017. Finally, Rioja Alta 890 Gran Reserva 2010 was aged for 54 months minimum in the cellar.

You should decant this Gran Reserva red wine for at least 4 hours before drinking.

Additional Information
Additional Information
Reviews
2 Reviews
Life affirming
Value
I think that this is a collector's item. So good it makes me scream of joy.
Review by One-eyed food taster (Posted on 27 August 2018)
amazing
Value
A wagnerian wine of immense depth and resonance. It will improve for 15 years.
Review by Wine expert (Posted on 1 August 2018)
Write a review
This websites use cookies. By continuing to browse the site you are agreeing to our use of cookies.
Accept More information