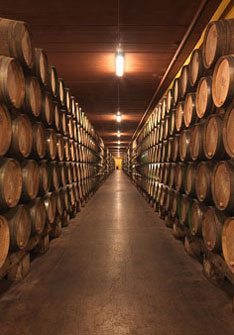 The Rioja Alta winery presents the pure elegance of the Rioja with their Reserve and Grand Reserve wines, and all of their wines always receive a long crianza ageing process.

In 1941 the Rioja Alta winery group began to produce their flagship wine, Viña Ardanza and in the middle of the 20th century this winery also introduced new vintages such as Viña Arana and Viña Alberdi and they stop the production of youthful wines. Soon after the Club de Cosecheros was founded providing this winery with a new way to reach out to their customers. The Rioja Alta winery was able to earn the trust of their community in the Rioja with their exclusive deals for their club members, and this winery also crafted certain wines exclusively for their club members.

During the second half of the 19th century this winery had new facilites built in Labastida which is less than one mile (1500 meters) from Haro. Furthermore, during this time the Rioja Alto winery expanded to incorporate other wineries and they formed the Grupo La Rioja Alta. The first acquisition was of the Lagar de Cervera winery in the center of Galicia with its ideal terroir for crafting white wines. Next this winery group acquired the Torre de Oña winery in the Rioja Alavesa and at the end of the nineteenth century this winery built the Áster winery in the neighboring Ribera del Duero.

With their grand knowledge of winemaking and grape cultivation, this winery very carefully cultivates 473 hectares of grapevines. Of these grapevines, 360 hectares are situated in the Rioja Alta and these are undoubtedly the best and most exclusive grapevines of the Rioja Alta. The grapes cultivated from these vines are used to craft La Rioja Alta´s very special vintages of wines. These grapevines are planted in calcareous soils in the sub-regions of the Rioja Alta: Rodezno, Labastida, Briones, Cenicero, and Fuenmayor. The Rioja Alta winery also crafts wines from Spanish Grenache grapes which they cultivate 63 hectares of in the municipality of Tudelilla, in the Rioja Baja. On average these grapevines yield 5,000 kilograms per hectare. These grapes always receive a double selection process and after their harvest the grapes are transferred to the winery in a very quick fashion. The meticulous selection of grapes receive long vinification and ageing processes following the philosophy of the Rioja Alta winery to craft the best quality wines on the market.

Each stage of vinification and grape cultivation at the Rioja Alta winery is realized in a very cautious manner. As a result, the Rioja Alta winery crafts very elegant wines that have gained global prestige. Year after year, all of the wines by this winery continue to receive Parker and Peñín scores of 90/100 or above.