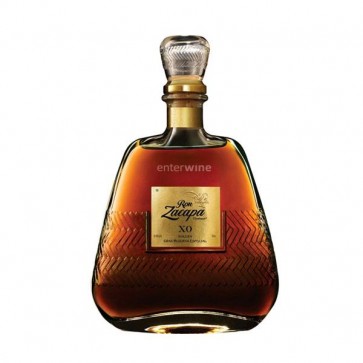 This Guatemalan rum is made from a blend of several rums aged for periods going from 6 to 25 years. In the last stage of the process, all of the rums were aged in barrels previously used to age Cognac.

Without exception, the rums were crafted from the purest, "free-run" sugarcane juice. Afterwards, they were fermented with selected pineapple yeasts and distilled in columns.

Ron Zacapa Centenario 25 años XO was subsequently blended and patiently aged in American oak barrels inside a plant located at an altitude of 2,300 metres above sea level using the traditional soleras system.

This rum by Zacapa Distillery has a nice mahogany colour and a well-balanced, sophisticated nose that displays aromas of orange rind, dry fruit, oak, caramel and marzipan. The palate is round, velvety and has a long finish.