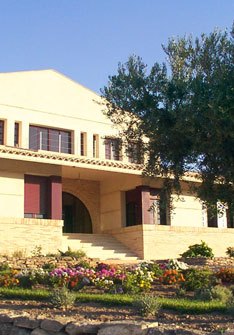 The Casa de la Ermita winery crafts their wines with a philosophy of being as natural as possible, respecting their environment and tradition of wine making.

The Casa de la Ermita winery is situated in the Jumilla D.O. of Spain in a French “château” style house with its vineyards being situated at 2,300 feet (700 meters) above sea level. This unique area of Jumilla is well protected inside the majestic “El Carche” National Park.

The Casa de la Ermita winery was founded in 1997 with their first vintage being released in 1999. This winery strictly follows their philosophy to craft wine in the most natural way possible, respecting both the environment and their tradition of wine making. This winery was the first winery in Jumilla to produce organic wines. Before this winery became popular in the Jumilla region, wines from this region had a reputation of being rough and overly blunt. Through the hard work of the Casa de la Ermita winery this reputation has changed and this winery is now providing very elegant and fruity wines that are not overpowering from the Jumilla D.O. of Spain.

The Queen grape varietal of Jumilla is the Monastrell grape (Mourvèdre). This winery primarily crafts these grapes but their enologists are also experimenting with the cultivation of other foreign grape varietals. These grape varietals are still being studied by the winery today.

The majority of the wines by Casa de la Ermita are red wines but this winery also crafts dry white wines and fresh desert and fortified wines.

The desert wines by the Casa de la Ermita winery are naturally sweet meaning that they have had no sugar added during their fermentation as all of their sugar content is gained naturally during the vinification process.