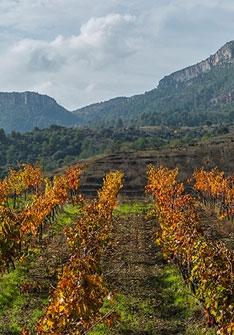 Celler Cesca Vicent is a family-run winery based in Gratallops, Priorat.

In 2000, Francesca Vicent, daughter of Cecilio Vicent, heir of one Gratallops' oldest wine families, decided to create Celler Cesca Vicent to honour the family name. Up to that moment, all of the grapes coming from the family estate, Mas d'en Corral, had been sold to the Gratallops Wine Coop.

Totalizing 11 hectares of vineyards, the Mas d'en Corral estate is located between cliffs on the right bank of the Montsant river, near the town of Gratallops, in heart of the DOQ Priorat. The property is divided into two plots, separated by a pine forest: “Mas Cremat” is oriented to the south, and “Maria Prunera” is north-oriented. As for the vineyards, they are planted on hills looking mainly to the south-east, with slopes up to 48% and a rich variety of soils: slate, granite, quartz, gravel and pebble stones.

The estate is planted with the traditional Priorat red varieties, Grenache and Carignan, and with the international ones Cabernet Sauvignon, Merlot and Syrah. A few years ago, Bodega Cesca Vicent also planted the white varieties White Grenache and Macabeo.

The wines of the Cesca Vicent winery are meticulously produced. The grapes are always picked up by hand, during a period which usually goes from September to mid October. Winemaking follows traditional patterns, with prolonged grape macerations and ageing in French oak barrels.

An environmentally committed company, all of the wines of Celler Cesca Vicent are organically certified by the CCPAE, the Catalan Council of Organic Agriculture.