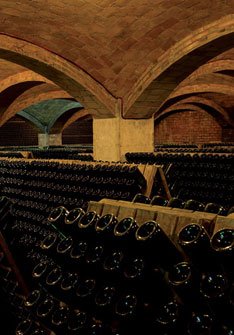 The Juvé y Camps winery presents the grand tradition of winemaking in Penedès with their grand cavas, elegant white wines, and expressive red wines that they have been crafting since 1920.

The Juvé y Camps winery carries the name of two families of winemakers that have been well-known since the eighteenth century in Spain. These names are very ingrained into the society of Penedès where this family is widely honored. Juvé y Camps enjoys century old vineyards and a very well cared for terroir. The cavas by the Juvé y Camps winery are a symbol of success in the Penedès region of Spain.

This house of cava was founded in 1920 by the married couple Joan Jové Baqués and Teresa Camps Ferrer and their first sparkling wine to carry the Jové brand name was released in 1921. With the direction of the last generation of the Juvé y Camps family winery, their cavas and wines have gained international prestige for being of a very high quality. Juvé y Camps sparkling wines are crafted from grapes that are cultivated at this winery´s seven vineyards: Espiells, Can Rius, La Cuscona, Can Massana, Mas Pagès, and Can Soler. All together these vineyards present 450 hectares of grapevines and each of these vineyards cultivates their grapes giving the utmost respect to the environment. These are fully organic cultivation practices that seek to protect the natural ecosystem at the vineyards.

The mission of the Juvé y Camps winery is to craft the highest quality of wine and cava without compromise, following traditional winemaking procedures while incorporating the best technology on the market to make the best wines on the market.

Juvé y Camps cavas are crafted wine bases that are produced in this winery´s new facilities in Espiells, where Juvé y Camps also craft their white wines Flor d’Espiells, Ermita d’Espiells, and Miranda d’Espiells. Of these white wines, Flor d’Espiells is fermented in French oak barrels from Allier. Juvé y Camps also use these facilities to craft their red wines Viña Escarlata and Casa Vella d’Espiells which are both aged in crianza in French and American oak barrels. The grand cava reserves by Juvé y Camps del Penedès (such as Reserva de la Familia, Gran Juvé Camps, and Milesimé) are crafted and aged in the grand underground cavas of this winery´s facilities in Sant Sadurní. These cavas are crianza aged in Rima in the science and darkness of these subterranean caves and they are only moved and rotated by the experts at this winery.