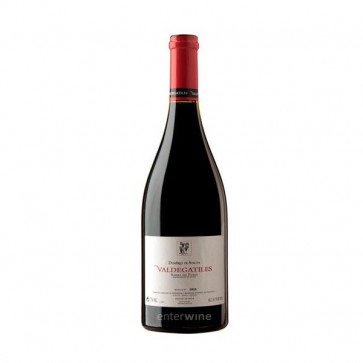 Dominio de Atauta Valdegatiles 2008 is one of the top wines produced by the prestigious Atauta winery in Ribera del Duero. This is a terroir-oriented wine that aims to communicate a sense of place, subtlety, minerality and finesse.

The grapes used to produce this remarkable red wine from Ribera del Duero come from the 1.7 hectare plot that the winery owns in the town of Valdegatiles, which is located at an altitude of 950 metres above sea level.

The pre-phylloxeric Tinta Fina vines are no less than 120 to 140 years old, and are grown in sandy-limestones soils. As for the climate, it is so harsh and windy that there is almost no need for human intervention in order to keep the plants healthy and free of parasites. Moreover, the farming procedures implemented by the winery are mostly biodynamical.

The grapes were harvested in little, 12-kg. boxes and brought to the cellar. Vinified through gravity, the grapes were pre-fermented for a period of 7 days without having been previously destemmed.

Then, Dominio de Atauta Valdegatiles 2008 was fermented and, finally, the wine was aged in French oak barrels for 19 months.

A precious, rare jewel of a wine.

Additional Information
Additional Information
Reviews
1 Review
valdegatiles
Value
Intense and super complex. Neverending finish.
Review by Sheriff Lobo (Posted on 30 January 2018)
Write a review
This websites use cookies. By continuing to browse the site you are agreeing to our use of cookies.
Accept More information