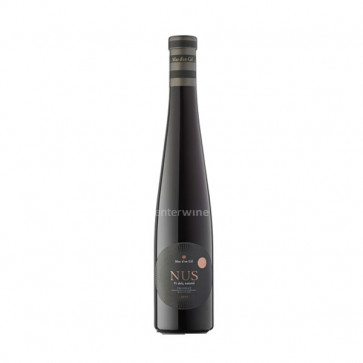 After trying several combinations, though, the winery decided to complement the main variety with tiny amounts of Syrah and Viognier.

The grapes of this red wine from Priorat were carefully harvested and meticulously vinified.

Process went as follows. First, the grapes of Nus de Mas d'en Gil were naturally dried, most in the vines, and the rest laid out on cane mats. Then they began fermentation, and the process was stopped through addition of alcohol. As a result, some residual sugar remained in the wine.

After that, this Spanish red wine was drawn off and transferred into French oak barrels, where it was aged for 18 months.

Finally, Nus de Mas d'en Gil 2014 was blended, and aged for a few months in the bottle prior to its release.

Drink over the next 10 years.

Additional Information
Additional Information
Reviews
1 Review
nus
Value
Superb sweet Priorat, on a par with some truly great Ports.
Review by Mckenzie DJ (Posted on 1 August 2018)
Write a review
This websites use cookies. By continuing to browse the site you are agreeing to our use of cookies.
Accept More information