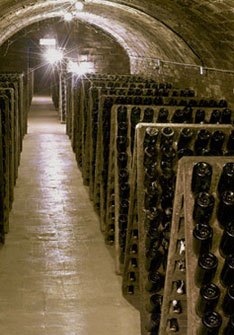 A long family tradition of winemaking that continues today with the objective of crafting high quality wines and cavas.

The Caves Blancher winery was founded in 1955 in Sant Sadurní d’Anoia, the heartland of Cava. The adventure of producing finely crafted wines, though, had began twenty-five years before, in 1930. Back then, Antonio Capdevila Pujol bought an estate called Can Canjón in the town of Teià, in the province of Barcelona. Mr. Pujol decided to plant native grapes and, after a decade, he was able to produce his first Cava following the traditional Champenoise method. Encouraged by his initial success, in 1952 he began the construction of a new winery in the center of Sant Sadurní d´Anoia. Then Josep Carbó, Antoni Capdevila's nephew, took control of the winery with the aid of his wife, Mercè Planas Oliver. Both were passionately comitted to producing high quality wines and cavas using the latest winemaking technology available on the market.

In the year 1985, the third generation of Antoni Capdevila's family began working at the Bodegas Blancher winery. Josep Carbó's children, Josep, Ramon, and Enric Carbó Planas also followed the original philosophy of Antoni Capdevila, but with a modern day approach.

All of the sparkling wines produced by the Bodegas Blancher winery in the Cava DO of Spain are either Brut or Brut Nature, with the exception of their Semi cava, which was created to commemorate the first cava produced by the family in the winery in Sant Sadurní, back in 1959. All of the cavas are aged between two and five years.