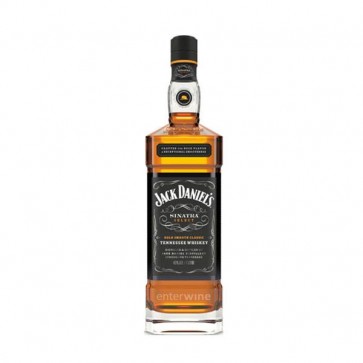 A tribute to The Voice, Jack Daniel’s Sinatra is a one-of-a-kind whiskey from Tennessee just as extraordinary as Ol' Blue Eyes himself.

Made from a mash of corn, rye and malted barley, this American Whiskey was meticulously crafted and then matured in special oak casks designed to maximize the contact between the whisky and the charred wood.

Before barreling, this extraordinary Tennessee Whiskey of the Jack Daniel's distillery was charcoal-filtered. This process smoothens this Jack Daniel's whiskey and also removes many of the harsh flavours resulting from the distillation.

Bottled at 45% ABV and presented in a 1 litre boxed bottle, Jack Daniel's Sinatra comes with a booklet which details Sinatra's long lasting relationship with Jack Daniel's.

You may want to drink this whiskey from Tennessee like The Voice did: over 3 ice cubes and a splash of water.