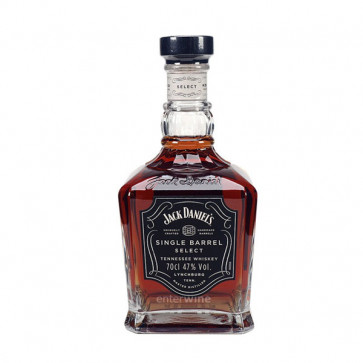 If you love the classic Jack Daniel´s Old Nº7 from the Jack Daniel's distillery you will definitely love Jack Daniel´s Single Barrel. Crafted in an artisan manner since 1997, this premium Tennesse Whiskey is the American equivalent of the Scotch single cask malts.

This delicate and elegant Whiskey shows a greater level of organoleptic complexity from the old Nº7, due to its ageing in a single barrel.

The recipe and style of Jack Daniel´s Single Barrel was decided by Jack Daniel´s master distiller. In order to achieve this result, besides using very special barrels, during the ageing process of this whiskey the barrels are stored in the attic of Lynchburg distillery, where extreme temperatures cause a greater reaction between the barrel and the distilled liquor.

This has created a soft and silky whiskey with a rare and unique bright coloured body. The nose carries some smoky aromas and some toasted oaky notes. The palate is round, rich and flavourful, with vanilla and oaked caramel sensations, along with subtle creamy toasted notes.

Each bottle of this American Whiskey is individually marked with the number of its barrel, its lot number, and the date it was bottled. Jack Daniel´s Single Barrel is a one-of-a-kind whisky.

Additional Information
Additional Information
Reviews
1 Review
goooood
Value
Classy and stylish. Good price and perfect delivery.
Review by Tennesse Pal (Posted on 29 August 2018)
Write a review
This websites use cookies. By continuing to browse the site you are agreeing to our use of cookies.
Accept More information