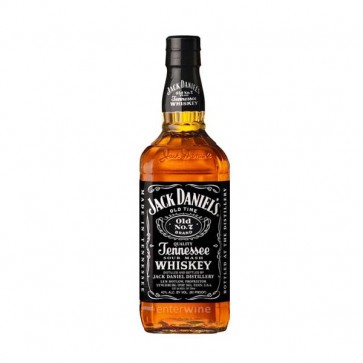 One can find various stories to explain the origins of this Nº7 whiskey by Jack Daniel´s, as it is their classic product. One well known story is that Jack Daniel had seven girlfriends, none of which did he ever marry or have children with. Another explanation of the origins of this whiskey´s name came from the barrel number the original batch was shipped with on a train. An additional explanation is that this name comes from the seventh batch Jack Daniels originally crafted before devoting himself to this recipe. Finally, it is believed that this name originated from Jack Daniels initials. Mr. Daniels always signed his initials with the number seven instead of the letter J as he believed that the number seven was his lucky number.

Before being aged in American oak barrels, this Tennessee Whiskey passed through three meters of maple charcoal, drop by drop. For this reason, it is not a Bourbon. This American whiskey is aged for the required time to achieve its very high quality and unique taste .For this reason, the ageing time is kept a secret, with the justification that rich maturity does not come for ageing alone, and therefore its age is not important.

The whiskey Jack Daniel’s Old Nº 7 was the first whiskey created by the Lynchburg distillery.  Amber-gold coloured, this whiskey carries spicy and aromas and notes of caramelized sugar and crème brûlée, with a background of ripe banana. The palate os this Jack Daniel's Whisky is mooth and silky, with subtle smoked notes and sweet spices. This whiskey has a very smooth aftertaste that is reminiscent of caramelized oak and smoked cedar woods.