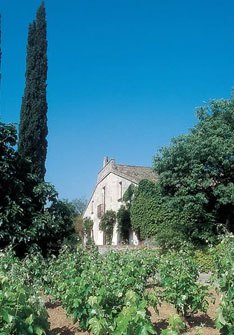 From only 12 miles outside of Barcelona, Spain, the Bodegas Parxet winery is crafting excellent wines and cavas from a very long family vinification tradition that has been handed down from generation to generation since the XVIII century under the Alella Denomination of Origin.

Just outside of Barcelona, Spain, 12 miles (20 Km) to the northeast, you can find the Bodegas Mas Parxet winery. This winery has been lead by the Suñol family since the XVIII century. In 1920 this winery decided to start producing French champagne style sparkling wines following champanoise methods (since they are in Cava Spain these sparkling wines are referred to as “cava”). Montalegre was the first cava mark released by this winery in honor of Tiana monestary in their town. These cavas were very widely accepted in the early 1920s. In the years that followed this winery changed their commercial name to Parxet, which remains their brand mark name to this day. The word “Parxet” etymologically stems back to the French word “parchet” which refers to a small parcel of grapes at a vineyard.

In October of 2006, Ramón Raventós Basagoiti purchased the Parxet winery, therefore joining the Marques de Alella and Tionio wine group. Today, this winery group has a winery in the Rioja, Bodegas Basagoiti, and another winery in Montsant, Portal del Montsant. Ramón Raventós Basagoiti is a young entrepreneur and grand wine enthusiast from a family with a long tradition of winemaking dating back many generations. In the year 2011, the Parxet winery had new facilities build in Avinyonet del Penedés. This wine group continues to grow in size and quality each year following the vision they were founded upon.

The sparkling wines by the Bodegas Parxet winery are crafted following a traditional method utilizing native grape varietals of the Cava Denomination of Origin in Spain. One of the things that make this winery unique is their work with the Pansa Blanca de Alella grapes. This is a very unique grape varietal in the Xarel-lo family that can be found in Penedés, Spain.

The cava by the Bodegas Parxet winery always begins with an exhaustive cultivation and harvest. The grapes are always pressed whole so that the lowest percentage of silt remains providing for the cleanest grape must possible at the inception of the vinification processes.

All of the wines by the Bodegas Parxet winery are crafted in a very sophisticated manner and this winery provides the highest guarantee of quality.