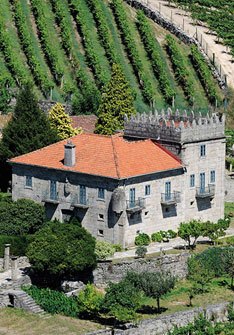 Marqués de Vizhoja crafts all of its wines from grapes grown in the 38 hectares of vineyards that surround its beautiful, French chateau-style winery.

Located in the midst of a beautiful natural environment, the French chateau-style building is surrounded by 38 hectares of estate vineyards planted along the banks of the Miño River in the Tea county.

The white wines by the Bodega Marqués de Vizhoja winery are mainly crafted from the indigenous grapes Albariño and Loureiro and marketed under the Rias Baixas Designation of Origin. They are fresh, fruity, and floral.

In addition to the wines, Marqués de Vizhoja also produces the traditional Galician Orujo, which is a pomace brandy made from the solid remains left after the pressing of the grapes. This brandy, along with other delectable liquors, are ideal for mixing with coffee. Recently, the winery also launched the Gotas del Marqués brandy in monodose packaging.