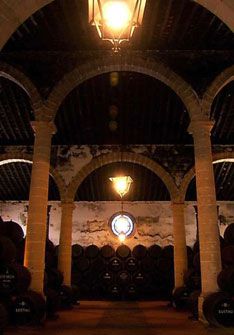 The internationally renowned Spanish fortified wines from the Bodegas Emilio Lustau winery are crafted in the “Los Arcos” facilities in the heart of Jerez .

In the nineteenth century the Bodegas Emilio Lustau winery built the “Los Arcos” facilities in the center of Jerez, Spain. These facilities are over 20,000 square meters and are composed of six different ageing cellars.

The Bodegas Emilio Lustau winery is the only winery that crafts wines in the three towns that constitute the area known as "Marco de Jerez", the Mecca of Sherry. The region is a geographical triangle formed by the villages of Sanlúcar de Barrameda, El Puerto de Santa María and Jerez de la Frontera.

Currently, Bodegas Emilio Lustau crafts more than 40 different products, including an impressive collection of dessert and fortified wines, brandies, and even vinegars. These wines have received awards at many national and international competitions. To name only a few, Bodegas Lustau has won the Enoforum contest, the Bacchus awards, the International Wine Competition of Andalusia, and many more.

The dry wines by Emilio Lustau are crafted exclusively from Palomino, the indigenous white grape from Andalusia that makes the best sherries in the world. The sweet wines, on the other hand, are made from a blend of Moscatel (Muscat) and Pedro Ximénez.