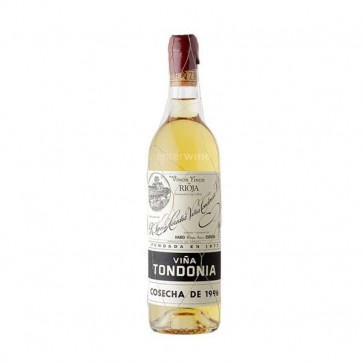 Gran Reserva white wine from La Rioja. Blend of Viura and Malvasía aged for 20 years, 10 in oak vats and 10 in the bottle.

This is the new vintage of one of the world's absolute best white wines. At its peak, Viña Tondonia Blanco Gran Reserva stands comparison with the great Montrachets from Burgundy and with Germany's most exquisite Rieslings.

The 2001 vintage, incidentally, was qualified as "Excellent" by the Rioja Regulatory Board.

This one-of-a-kind Gran Reserva white wine was produced by the legendary R. López de Heredia-Viña Tondonia winery from a blend of Viura and Malvasía, sourced from vines planted in 1913 and 1914 on the right bank of the Ebro river, at an altitude of 470 metres.

The grapes were meticulously harvested, destemmed and then fermented in little oak vats. Malolactic fermentation took place in Bordeaux barrels, after which the wine was aged for 10 years in American oak barrels with rackings being performed twice a year.

When the ageing process was completed, the wine was clarified with egg whites and bottled unfiltered. After that, Viña Tondonia Blanco Gran Reserva 2001 spent a further 10 years in the bottle prior to its commercial release onto the market.

It is worth noting that the wine presented here received a perfect score from Tim Atkin MW, as well as 99 Parker points.